It was 2007 when for the first time ABC Caffè came in MotoGP with De Angelis, the young San Marino rider.

Some years have passed but ABC Caffè is always close to his favorite motorcycle racer, Alex De Angelis.

In the last year Alex has competed for the team Octo IodaRacing with ART, but was forced to miss a few races because of an accident in free practice, in which he suffered a pulmonary contusion and fracture to vertebrae and several ribs.

Alex has long been at his home in San Marino and its state of health is in continuous improvement.
His return to the track is scheduled for MotoGP winter tests in February 2016. Until then ABC Caffè will be close to Alex wishing him to get back to the best.

Always ready to support him in and out of the MotoGP circuits, we at the ABC Caffè do every good wish with our coffee. 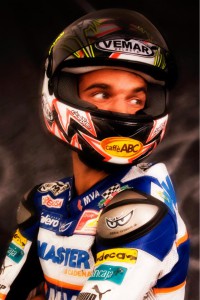